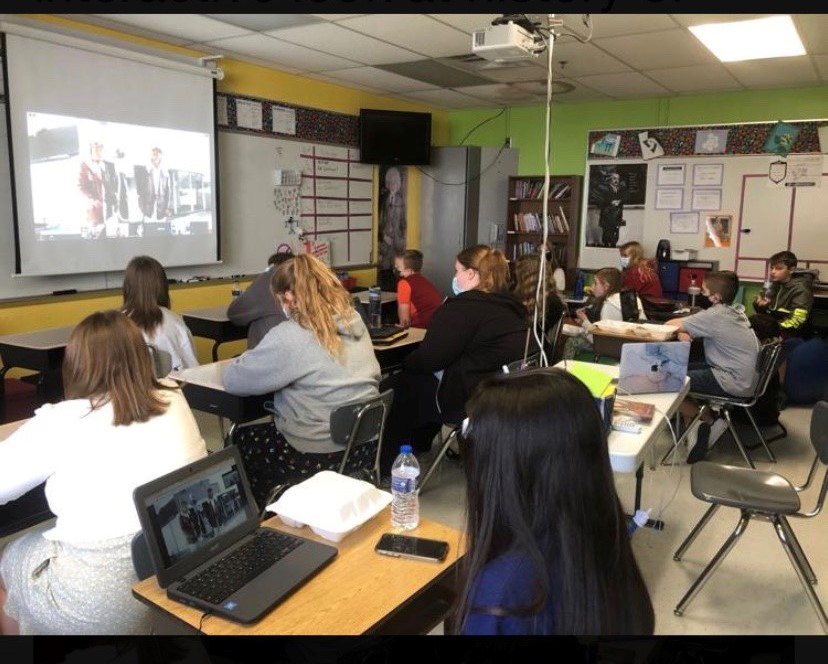 Above: A chance to learn history in an engaging way, South Middle students spent a portion of Wednesday morning interacting with the actors of “The Flying Hobos,” a show on the history of the first Black aviator to fly across the continental United States. The show was adapted to a virtual format amid COVID-19.

MARTINSBURG — They may have been separated by miles, but the students of South Middle School and the actors of “ The Flying Hobos” couldn’t have been more connected Wednesday morning as they came together for the interactive play.

In partnership with the Greatest Stories Never Told and made possible by a grant from the NASA West Virginia Space Grant Consortium, the play is a living history piece that celebrates James Herman Banning, an African American aviation hero who overcame racial barriers of the 19020s and 1930s to become the first Black aviator to fly across the continental United States.

The play showcases how Banning and his co-pilot, Thomas Cox Allen, flew from town to town, raising money to pay for gas and repairs, and traveled from California to New York City.

The play came to life as writer Louisa Jaggar searched for books for her grandson, who is African American, about explorers and STEM leaders in whom he could see himself. Finding those didn’t exist, a friend of Jaggar’s came across an article on Banning, inspiring her to begin telling the stories she was in search of.

“The idea was to start telling stories about minority STEM heroes, both women and minority heroes, because those are the ones nobody wrote about,” Jaggar said. “They have a history, but the tricky part with the history is they’re not recorded in our history books, we don’t find them by going to the bookstore, we don’t find them by looking in the libraries. Where we find them is by looking in attics. Thomas Cox Allen’s manuscript was found in an attic that, at the time, was in a museum in a box, at the bottom of a box. It was just circumstance that Pat Smith went there, because she was looking for something completely different, to be honest.”

She added with a grin: “It’s startling to know you can lift a box up and go into it, and you might find something nobody knew about before. That’s where we find women’s histories and minority histories often times…and then call me if it’s really cool.”

Friends with South Middle teacher Cindy Evarts since childhood, Jaggar’s play was intended to be shared with the students in person last year until COVID-19 put a pause to that. Instead, the classes joined virtually, three being able to join the Zoom to interact with the actors during those portions of the show, while the others watched via a YouTube live stream.

“The challenge has been to be interactive in a virtual environment,” Evarts said. “Originally, we were going to have them come to the school and put on some performances. We were going to try to get one done in the community. We’d talked to the Apollo, but when COVID happened, we went from, ‘When’s this going to be over? When can we do this?’ Finally, it came to the point where we realized we wouldn’t be able to do it unless we adjusted. Just like teachers have had to adjust, they had to adjust and find ways to make it interactive via Zoom or whatever.”

The pair regularly discusses the play and Jaggar’s works during runs, Evarts giving Jaggar the educator point of view as she created the play to be interactive, for students to fully engage in the history they were learning.

“That’s one of the things Cindy and I talked a lot about on our runs, because I really was boring sometimes, now that I’m thinking about it,” Jaggar laughed. “But I worked at the Smithsonian for years and helped do their video conferencing. I believe in interaction. Theatre is so alive, and if you can bring that alive into the audience and connect like they do in Williamsburg — because our actors went to Williamsburg and trained there for a little bit — if you can reach an audience and get them to work with you and do things with you and answer questions with you, then it becomes an experience you’re never going to forget. You’ve tapped on them emotionally and made them think. Once you’re interacting, you can’t just sit back and close your eyes.

The challenge to move to a virtual platform remained, the technology piece playing a obstacle on several fronts — from the cost, which was offset in part by a grant from the National Endowment for the Arts, to gaining interaction on Zoom. Jaggar said it become an initiative to remind audiences to turn on their cameras and be a part of the show, the actors and technology side getting better and better with every performance.

“It’s going make it a whole lot more fun for you. It’s going to be more fun for us,” Jaggar said. “Whether you’re live or live streaming, you never know what audience you’re going to get. You can’t tell. But we’re learning slowly that too big of an audience, and no one will talk. When you’re doing Zoom, you want to make it a little smaller.”

Evarts was proud of the participation from the South students, admitting she was nervous some may talk too much at times. The duo thought to one student who offered to buy a suit for $1, as Evarts explained she told the students the play took place in 1932, not quite understanding inflation. The actor retorted with an offer of $199.

Evarts introduced her students to the material via Jaggar’s picture book on the subject, the show helping bring Banning to life even more despite the distance between students and actors.

“It was great. I had read them the book — Louisa has written a picture book about it — and I love for them to see other people, bring other people into our little Martinsburg, West Virginia, see these guys in New York,” she said. “They were there and talking to them, making them laugh. It was fun to watch that.”

Jaggar added that performing for the middle-school age is one of her favorites, knowing if you impress a pre-teen or young teenager, then you’re doing something right.

“I love middle school. You can’t pull anything on a middle schooler,” she laughed. “College kids, if you’re funny at all, they’re going to be nice to you, but middle schoolers won’t be. If you can get a middle schooler, they don’t care. It’s that funny age where none of us were at our best in middle school anyway, so you know if you’ve won them over, then you’ve truly won something there. You can take that anywhere else. I find them the hardest critics, but they’re also the best ones, too.”

Jaggar has shows in the works on other heroes forgotten by time, in a sense, that she is excited to share, explaining how history expands, much like the sciences, as more and more is learned over time.

“The thing about history is it’s really alive. It’s not not changing as much as we keep learning more,” she said. “It’s like science in a way, because you keep finding something new, and then you have to open up and really look at it. You don’t want blinders on. You want to keep as open of a mind as you can because then you find all sorts of new things out. That gives you a really vivid, vibrant picture of history, because history is stories. They’re our stories, and Banning’s story belongs to every American. He was an American. This is not just Black history. This is not just minority or STEM history. This is our history of our country, and somebody who added a great deal to it. The Tuskeegee Airmen might not have happened without Banning.”