From the time he was six years old, Matt Underwood’s family knew he was going to be an engineer. “They bought me a K’nex set, a big Ferris wheel, and weren’t sure I was quite old enough for it. When they came downstairs the next day, I had it built and was operating it in our living room.” 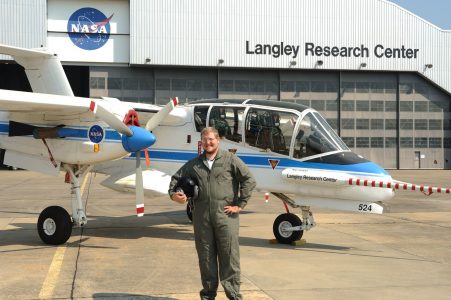 Matt Underwood outside Langley Research Center as an intern.

Matt received his Bachelor of Science degree in Mechanical and Aerospace Engineering from the Statler College of Engineering and Mineral Resources in 2012, and he is a past NASA WV Space Grant Consortium (WVSGC) fellow.  Matt says his favorite thing about working at NASA is that he learns something new every day. “Each project, each day brings a new challenge.” Having worked for seven years as a NASA Aerospace Research Engineer, focused on Air Traffic Management and flight-deck technologies, he has recently transitioned into a position as a Assembly, Integration, and Test Engineer, working on projects such as the Mars Sample Return Mission, which will return rover-collected samples of Martian rock and soil to Earth for analysis.  This change in roles is common among his colleagues at NASA, as many people there are lifelong learners like Matt who seek out new challenges to expand their skill sets. “It isn’t about job security, it’s about career security. Having applicable skills for the job at hand and the ability to learn new ones.”

Thanks to the support from WVSGC, Matt was able to attend the NASA Langley Aeronautics Academy in the summer of 2012 (https://aero.larc.nasa.gov/nasa-academy/academy/). He describes this as his first exposure to what it meant to be an engineer, working as part of an interdisciplinary team on real problems. “Before this, my goal was working with one of the big aerospace companies.” Part of what appealed to Matt about working with NASA was the challenge. “We joke about things being ‘NASA hard.’ If anyone else could do it, it would already be done.”  His time at the Academy served as a “three-month, live interview” for his position at NASA, and he credits it as what got him his job there.

The ability to work as part of a team is crucial to Matt’s job.  “There’s this stereotype of engineers as introverts, working alone. That’s just not true.” The highly detailed and complex work of safely getting delicate equipment into the air requires teams of experts.  “No one person can do everything themselves”.  Being able to work collaboratively, to make connections with people, is an essential part of being an aerospace engineer.

Matt is passionate about paying it forward, encouraging, and mentoring others, as he was encouraged and mentored.  He wants young people interested in the field to get those hands-on experiences that he had as part of the NASA West Virginia Space Grant Consortium internship opportunities.  “You find out what you like, and what you don’t like!”  Something he stresses to the students that he works with is that it isn’t just about getting good grades.  “Just because you fail a math test, it doesn’t mean you’re bad at math.” Matt shares how his brother had to work hard to understand math in grade school.  “In college, his math grades were better than mine, and now he’s a successful engineer too!” 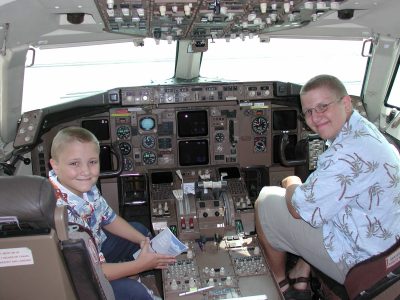 Matt and his brother in a Boeing 757 cockpit as k​ids.

So many of Matt’s early experiences outside of school, from building those K’Nex and Lego creations, to working on projects around the house with his dad, to building treehouses in his backyard, provided him important experience tat he applies today to challenging engineering projects.  “You have to plan, do some research, and apply what you know to develop and test these systems.” He also credits his parents, great high school teachers, and professors at WVU with his success. “It’s important to surround yourself with people early throughout your life who foster your passion. My passion has always been designing, building, and testing things, and I’ve enjoyed great support from the people in my life to do those things.”

From working on flight deck systems to managing teams through challenging setbacks, nothing quite compares to the awe Matt experiences during the launch or landing of a NASA space mission. “These are the things that inspire a new generation – the Artemis generation,” who will be the next engineers and pioneers at NASA.

Matt and his daughter watching the successful Crew-2 launch, April 23, 2021.

For more information about opportunities to work with NASA, please contact Candy Cordwell at candy.cordwell@mail.wvu.edu

Lots of Moon action this month—and we don’t just mean Orion’s journey! On the evening of Dec. 1, the Moon will appear very close to Jupiter. A few days later, it’ll cover up Mars and end the month by sliding past Saturn and Jupiter. Our What’s Up! guide has all the details.

Two weeks after the @NASA_SLS rocket launched @NASA_Orion on the #Artemis I mission, analysis shows the rocket’s core stage and four RS-25 engines met every expectation during launch as well as in the final minutes of the countdown before liftoff. https://go.nasa.gov/3VdCVdD

NASA has announced the identification of 13 candidate landing regions near the Moon's South Pole for the Artemis III mission, the first crewed mission to the Moon's surface since 1972.
Learn more here: https://www.nasa.gov/press-release/nasa-identifies-candidate-regions-for-landing-next-americans-on-moon