Work Completed to Date:
During the summer, before the re-start of the school year, the Radioactive Robotics First Tech
Challenge team came together to accomplish two goals – to help the younger county teams prepare for
the new season under COVID-19 restrictions and to discuss and prepare for the upcoming season.
In July the team worked to help the younger (elementary-middle school) robotics team put together
plans that would allow them to practice robotics under the new COVID-19 restrictions, which
includes both meeting outside and keeping distance whenever possible. After transporting much of
the younger team’s gear to their new meeting location and setting up a meeting space, the FTC team
realized that the younger team would need a new, portable table for their playing field, one that
could be readily set up outside but then put away inside for shelter between meetings. After some
research the team found plans for a folding, portable robotics table which they built and then
modified to ensure a smoother playing field for the younger team. The table (photos in the
highlights section) has been a huge success and is in use twice a week by the younger team.
The team met twice during the summer, primarily to discuss plans for the upcoming year and any
background work or training the team they felt would be necessary. As a result of those meetings,
two of the team members undertook CAD (Computer Assisted Design) classes online, and one of the
team members (Max O’Ganian) is now proficient in the use of the AutoDesk Fusion CAD software
(offered free of charge to FIRST Robotics teams). One of the team members also spent the summer
learning 3-D printing processes and rebuilding a small, old 3-D printing machine donated to the
team by Green Bank Observatory.
The official start of the 2020-2021 First Tech Challenge robotics season was not until September 9,
2020, which coincided with the start of the new school year across West Virginia. The team has
been meeting regularly since that date. Most meetings are held outside in the same meeting space
(but at different times) as the younger robotics team. Due to COVID-19 concerns, though, some of
the meetings have been moved online, and those are focused on planning and outreach.
The team has revisited its goals for the year, and have decided to focus on solidifying their
design cycle (design → prototype → test → build; repeat) and ensuring they follow it, improving
their documentation process, and re-inventing their outreach plans to accommodate the COVID-19
restrictions in place at the county schools.
With the 2020-2021 challenge now released, the team has also begun designing and prototyping a new
robot, taking advantage of their new CAD skill and the formal design process they wish to follow.
At this point the team has prototypes a number of components for their robot, but is not yet at the stage
of putting the prototyped components together.

COVID-19 put an early end to the 2019-2020 robotics season. When schools closed within Pocahontas
County on March 13, 2020 the team was also forced to cease meeting. However during the summer
months the team successfully met a few times over computers and have now put together a successful
outdoor meeting location to allow for future meetings to occur.

The team has felt a number of impacts from COVID-19, but the main impacts are:
• A number of meetings have been moved to online, which has caused significant inefficiencies
as some team member’s home internet is highly unreliable
• The 2020-2021 season has been extended, and may last through the summer of 20201
• Many of the outreach activities planned by the team have been cancelled, such as the Green
Bank Observatory open house, school assemblies, etc. Similarly, the team’s ability to mentor the
younger robotics team is the county is curtailed, to minimize the possible spread of COVID-
19. The team is working to develop a new outreach plans
• The team has been unable to recruit new members this year, as their work space is extremely
limited. The team has modified their goals to reflect their smaller than expected team size.

In all, the team will successfully move through the season but with a more limited meeting schedule
and new outreach goals.
Cost Impact

So far the cost impact form COVID-19 has been minimal for this team, as they have managed to take
advantage of existing equipment, etc to continue moving forward.

Building the new, portable table for the FLL Robotics team

The new table, ready to be used. 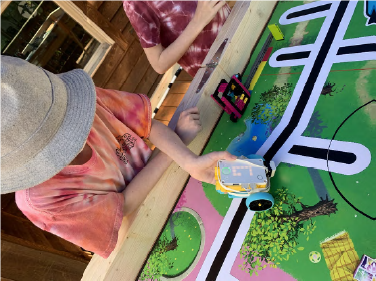 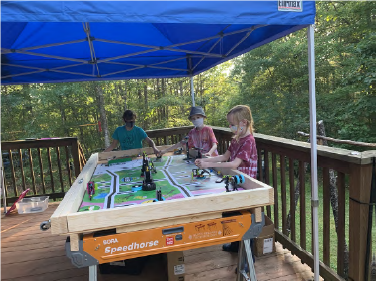 The new portable table, in use by members of the FLL robotics team. 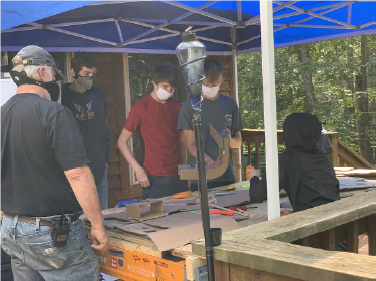 Members of the FTC team showing off one of the cardboard prototypes with Dennis Egan, the head
mechanical engineer at Green Bank Observatory. 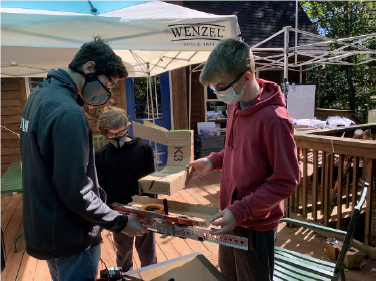 Testing two of the prototypes to see how well they work together.

This project is funded through a NASA WVSGC Extension and Public Outreach Grant. For more information on EPO Grants, visit our opportunities page here.

🗣Check out this article about the Science Olympiad and our Marshall University physics students! https://www.spsnational.org/the-sps-observer/fall/2021/coaching-west-virginia’s-top-science-olympiad-team-nationals

Extremely proud of our team in this @NASAPrize competition organized by @SpaceCenterHou ! We qualified for the final competition and won $15k in prize money! #WVURobotics #NASA #Robotics https://twitter.com/wvustatler/status/1350116794732851203